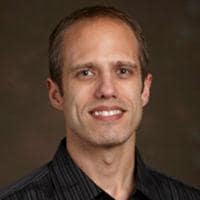 Kevin D. Smith is a software developer at SingleStore. Previously, he was a software developer at SAS for over 14 years. He began his career in the development of PROC TEMPLATE and other underlying ODS technologies, including authoring two books on the subjects. He was heavily involved in client-side work on the SAS® Viya® platform. This included development of the R, Python, and Lua SWAT packages, as well as higher-level packages built on top of the foundation created by SWAT. 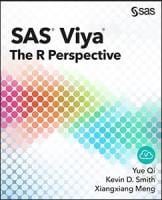 SAS® Viya®: The R Perspective is a general-purpose introduction to using R with the SAS Viya platform. SAS Viya is a high-performance, fault-tolerant analytics architecture that can be deployed on both public and private cloud infrastructures. This book introduces an entirely new way of using SAS statistics from R, taking users step-by-step from installation and fundamentals to data exploration and modeling.

Want to be among the first to experience SAS® Viya?
Apply to be considered for a free trial of SAS® Visual Data Mining and Machine Learning.

*Our books are also available in print and e-book formats
from your local bookstore or favorite online bookseller. 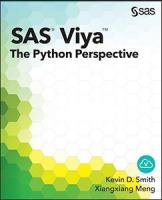 This book is an introduction to using Python to drive SAS Viya by directly connecting to the back-end analytics engine: CAS. CAS (Cloud Analytic Services) is a fault-tolerant, high-performance analytic platform that can be installed in many environments (desktop, computing grid, cloud). It is used by various SAS applications, but also has an API accessible from languages such as Java and Python.

Want to be among the first to experience SAS® Viya?
Apply to be considered for a free trial of SAS® Visual Data Mining and Machine Learning.

*Our books are also available in print and e-book formats
from your local bookstore or favorite online bookseller. 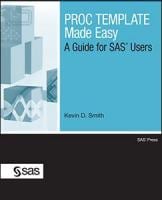 PROC TEMPLATE Made Easy: A Guide for SAS® Users

Shows you how to build your own custom styles and tables in SAS. Written for all levels of users, this book guides you through the process of writing templates, explains how PROC TEMPLATE saves templates, and teaches you how to create shareable template stores. The visual appendixes of all style attributes and graph colors serve as essential reference material.

*This book is out of print. 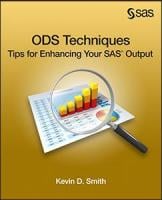 SAS® Output Delivery System (ODS) expert Kevin D. Smith has compiled a cookbook-style collection of his top ODS tips and techniques to teach you how to bring your reports to a new level and inspire you to see ODS in a new light. This collection of code techniques showcases some of the most interesting and unusual methods you can use to enhance your reports within the SAS Output Delivery System.

*This book is out of print.