Semicontinuous random variables are characterized by a continuous distribution that has point masses at one or more locations. One way to model semicontinuous data is to fit a generalized linear model by using a Tweedie distribution for the response variable. Tweedie distributions have been used in such diverse fields as actuarial science, economics, telecommunications, ecology, medicine, and meteorology. This example illustrates how to fit a Tweedie model to aggregate insurance claims payments data by using the HPGENSELECT procedure which is available in SAS/STAT 12.3, recently released with SAS 9.4.

, which describes the mean-variance relationship of the distribution when the dispersion is held constant. If Y follows an exponential dispersion model distribution that has mean

, then the variance of Y can be written as

(Dunn and Smyth, 2005). The distribution is defined for all values of

in the open interval

). Apart from these special cases, the probability density unction of the Tweedie distribtion does not have an analyticl expression. For

, it has the form

does not have an analytical expression. It is usually evaluated by using the series expansion methods that are described in Dunn and Smyth (2005).

and the scale parameter

, the density is a probability mass that is governed by the Poisson distribution, and for values of

, the density is a mixture of gamma variates with Poisson mixing probability. The parameters

are related to the natural parameters

of the Tweedie distribution as

The mean of a Tweedie distribution is positive for

When modeling aggregate payments from insurance claims, if you assume that the arrival of claims follows a Poisson distribution, that the size of individual claims are independently and identically gamma distributed, and that the arrival and sizes are independent of one another, then the aggregate payments follow a Tweedie compound Poisson-gamma mixture distribution (Frees, 2010). This example uses PROC HPGENSELECT to fit a Tweedie model to the aggregate loss data from a Swedish study about third-party automobile insurance claims for 1977. The data were compiled by the Swedish Committee on the Analysis of Risk Premium in Motor Insurance (Andrews and Herzberg, 1985). The following SAS statements create the data set MotorIns, and Table 1 describes the variables:

Table 2 describes the levels of the classification variable Kilometres.

Table 2: Values and Labels of Kilometres

Table 3 describes the levels of the classification variable Zone. The zones are given from a detailed investigation of 100 areas in 1972 and represent combinations of traffic intensity, state of roads, climatic differences, and so on (Andrews and Herzberg, 1985).

Table 3: Values and Labels of Zone

The models of cars are classified into 10 premium classes, but in a special investigation for 1977 eight common pure models were chosen and the rest were put in a combined class for reference (Andrews and Herzberg, 1985). The levels 1–8 of the classification variable Make represent the eight pure models, and level 9 is the combined class.

The variable Bonus is a measure of individual claim history. The insured motorist starts in the class Bonus = 1. Every year that no claim is filed, the insured moves up one class (Andrews and Herzberg, 1985).

The CLASS statement specifies that the variables Kilometres, Zone, and Make are categorical variables. The SPLIT option requests that the columns of the design matrix that correspond to any effect that contains a split classification variable be able to be selected to enter or leave a model independently of the other design columns of that effect. The PARAM= option specifies a reference cell encoding for the classification variables.

The MODEL statement specifies that the response variable have a Tweedie distribution with a log link function. The candidates for the linear predictor include the main effects and the interactions between the classification variables Kilometres, Zone, and Make and the continuous variable Bonus. The OFFSET= option specifies that the variable LogInsured be included in the linear predictor with a coefficient of 1.

The OUTPUT statement requests that the selected model’s prediction and residuals be saved to the SAS data set Tweedie.

The ID statement requests that the variable Payment also be included in the output data set.

The “Model Information” table reports that a Tweedie model was fit with a log link function.

Output 3 shows that the sample size is 2,182, and the “Class Level Information” table shows the number of levels and the level values of the three classification variables.

The “Selection Summary” table in Output 4 reports the variables that are added at each step of the selection process. The summary shows that 30 effects plus an intercept were selected and that the selection process terminated because the sequence of effect additions and removals began cycling.

Output 6 displays the estimates of the model parameters. The estimate of the dispersion parameter,

, is 1.36. The effect of using the SPLIT option in the CLASS statement is apparent. None of the classification variables have all their main effects or complete sets of interactions included in the model. The result is a more parsimonious model than you would achieve without enabling the design columns to enter and leave the model independently.

The following SAS statements generate a scatter plot that compares the model predictions with the observed values of the response variable.

Figure 2 shows that the predictions of the final model compare favorably with the observed responses. 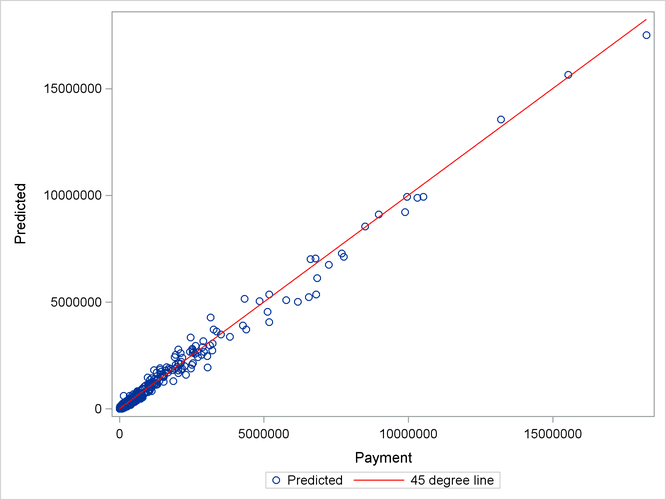