This example illustrates fitting Bayesian zero-inflated Poisson (ZIP) models to zero-inflated count data with the experimental MCMC procedure. ZIP models are often used when count data show an excess number of zeros, which in turn causes overdispersion. Consider survey data collected at a state park concerning the number of fish that visitors had caught in the last six months. People from two different populations provided information: those who attended the park and fished, and those who attended the park and did not fish. Zero fish caught has a different meaning for the two populations.

Count data frequently display overdispersion and excess zeros, which motivates zero-inflated count models (Lambert; 1992 ; Greene; 1994 ) . Zero-inflated count models offer a way of modeling the excess zeros in addition to allowing for overdispersion in a standard parametric model. Zero inflation arises when one mechanism generates only zeros and the other process generates both zero and nonzero counts.

Zero-inflated models can be expressed as a two-component mixture model where one component has a degenerate distribution at zero and the other is a count model. More formally, a zero-inflated model can be written as

is a standard count model with mean

is a mixture proportion with

The following hypothetical data represents the number of fish caught by visitors at a state park. Variables are created for the visitor’s age and gender. Two dummy variables, FEMALE and MALE, are created to indicate the gender.

Although these data appear to be a likely candidate for a ZIP model, you typically begin with a standard analysis and evaluate the evidence for overdispersion.

Suppose you want to fit a Bayesian Poisson regression model for the number of fish caught with density as follows:

denotes a conditional probability density. The Poisson density is evaluated at the specified value of

. The three parameters in the likelihood are

Suppose the following prior distributions are placed on the three parameters:

indicates a prior distribution. The diffuse

prior expresses your lack of knowledge about the regression parameters.

as given in McCullagh and Nelder ( 1989 ) , is calculated to assess model fit:

for a Poisson likelihood where

as defined in Equation 2 ,

is the expectation, and

is the variance. If there is no overdispersion, the Pearson statistic would roughly equal the number of observations in the data set minus the number of parameters in the model.

The following SAS statements use the diffuse prior distributions to fit the Bayesian Poisson regression model and calculate the fit statistic.

The PROC MCMC statement invokes the procedure and specifies the input data set. The SEED= option specifies a seed for the random number generator, which guarantees the reproducibility of the random stream. The NMC= option specifies the number of posterior simulation iterations. The THIN=10 option controls the thinning of the Markov chain and specifies that one of every 10 samples is kept. The PROPCOV=QUANEW option initializes the Markov chain at the posterior mode and uses the estimated inverse Hessian matrix as the initial proposal covariance matrix in the random walk Metropolis algorithm. The MONITOR= option specifies a list of symbols (which can be either parameters or functions of the parameters in the model) for which inference is to be done. The symbol _parms_ is a shorthand for all model parameters—in this case,

. The symbol Pearson refers to the Pearson chi-square statistic, which is a function of the data and parameters.

in a single block and assigns initial values to each of them. The PRIOR statement specifies priors for all the parameters. The notation beta: in the PRIOR statement is a shorthand for all variables that start with ' beta '. In this example, it includes beta0 , beta1 , and beta2 . The shorthand notation is not necessary, but it keeps your code succinct. The assignment statement for mu calculates

It is essential to examine the convergence of the Markov chains before you proceed with posterior inference in Bayesian analysis. With ODS Graphics turned on, PROC MCMC produces graphs at the end of the procedure output which allow you to visually examine the convergence of the chain. See Figure 1 . Inferences should not be made if the Markov chain has not converged. 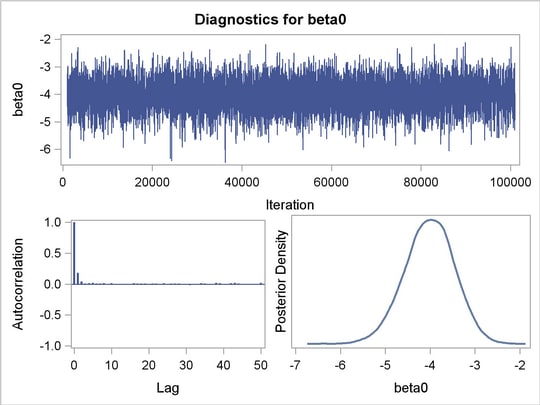 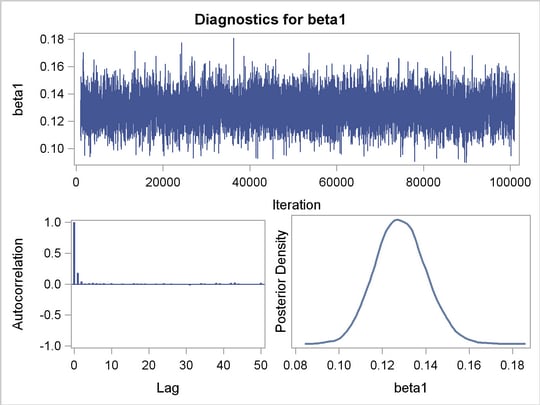 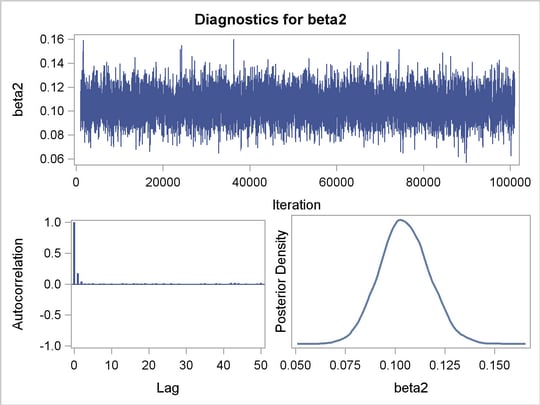 PROC MCMC produces formal diagnostic tests by default, but they are omitted here because an informal check on the chains, autocorrelation, and posterior density plots show desired stabilization and convergence.

The "Parameters" tables, shown in Figure 2 , lists the names of the parameters, the sampling method used, the starting values, and the prior distributions.

Figure 3 displays summary and interval statistics for each parameter’s posterior distribution. PROC MCMC also calculates the sampled value of the Pearson chi-square at each iteration and produces posterior summary statistics for it.

and three model parameters, the sampled value 92.2674 of the Pearson chi-square statistic is much greater than

Zero inflation is a likely cause of this overdispersion. A Bayesian ZIP model accounts for the extra zeros and potentially provides a better fit to the data.

You can write a Bayesian ZIP regression model for the number of fish caught as follows:

is defined in Equation 1 ,

is defined in Equation 2 , and

surveyed visitors. The model is a weighted average of the degenerate function (which places all mass at zero) and the Poisson regression.

is one when COUNT equals zero and remains zero for a COUNT value greater than zero. The four parameters in the likelihood are

Suppose again that the three regression parameters have the same diffuse, normal priors as in Equation 4 . The mixture proportion has a uniform(0,1) prior distribution.

The Pearson chi-square statistic for the ZIP model is calculated as in Equation 5 , but now the mean and the variance respectively are

The following SAS statements use the prior distributions to fit the Bayesian ZIP regression model and calculate the Pearson chi-square statistic.

; it is one when COUNT equals zero and zero for values of COUNT greater than zero. The MODEL statement specifies that llike is the log likelihood for each observation in the model.

The Pearson chi-square statistic is calculated according to Equation 5 ; the moments are evaluated in the mean and sigma2 assignment variables. 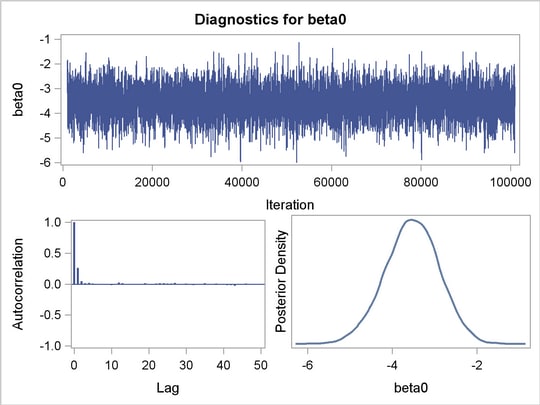 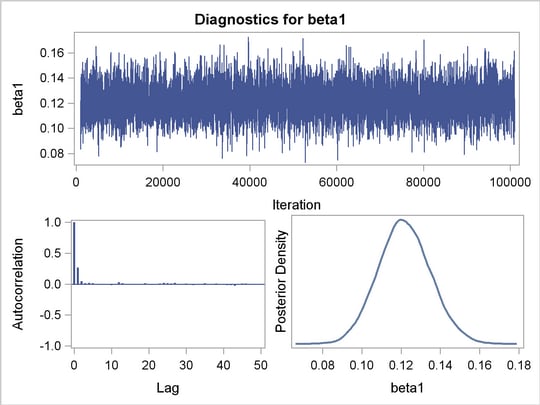 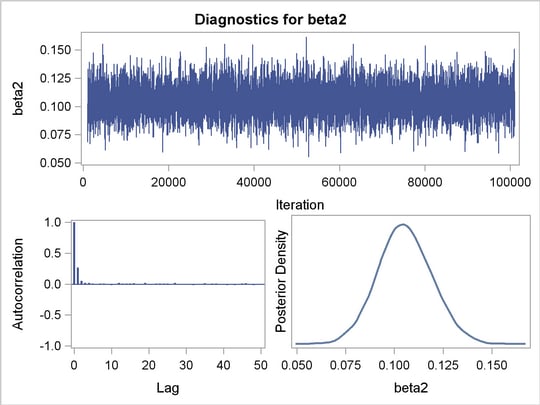 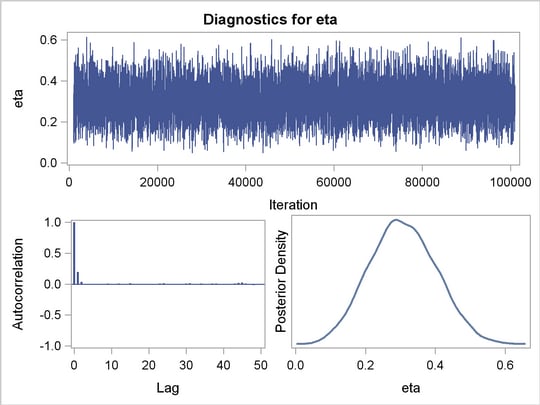 The diagnostic plots for the regression parameters and mixture proportion are illustrated in Figure 4 . They show the desired convergence, low autocorrelation, and smooth unimodal marginal posterior densities for the parameters.

Figure 6 displays summary and interval statistics for each parameter’s posterior distribution. PROC MCMC also calculates the sampled value of the Pearson chi-square at each iteration. This statistic in the Bayesian ZIP model is greatly reduced with a value of 48.8650, which suggest a much better fit compared to its value of 92.2674 in the Poisson model.

Modeling the catch data set with a Bayesian ZIP regression model accounts for the zero inflation and removes the overdispersion in the Poisson regression model. Figure 6 shows the posterior parameter summaries in addition to the lowered Pearson chi-square statistic. The posterior mean of the mixture probability is

for the zero-inflated component and

for the Poisson regression component. The posterior parameter means of

, respectively. That is, an increase in one year of age is estimated to be associated with a change in the mean number of fish caught by females and males by a factor of

, respectively. For this model, choice of priors, and data set, females catch more fish with age than males.