Bayesian Binomial Model with Power Prior Using the MCMC Procedure

Power priors (Ibrahim and Chen; 2000 ) are a useful family of informative priors when relevant historical data is available. You can use power priors when you want to take historical data into account while analyzing similar, current data. This example illustrates fitting a Bayesian binomial model with a power prior and also demonstrates two useful features of PROC MCMC: using nonstandard distributions and assigning different likelihood functions to different subsets of the data.

Suppose that, in addition to data from a current study, you have similar data from a historical data set or pilot study. A power prior enables you to capture the information collected in the pilot study and incorporate it into analysis and inference in the current study. The historical data gets integrated via an informative prior and provides a convenient way of updating past knowledge.

are the historical data (from the pilot study),

is the likelihood of

is a discounting or scale parameter with

that controls the amount of weight you want to put on the historical data, and

is a prior for

before the historical data

The posterior distribution of

represents the data from the current study,

represents the historical data, and

represents the density function for a single observation in either the historical or the current data set.

and rewrite the posterior distribution in Equation 1 as the following:

The posterior distribution Equation 2 is used to model the hypothetical clinical trial setting described in this example. The following SAS statements create the PTRIALS data set that represents binomial data collected in a pilot study of a clinical trial.

In the INPUT statement,

represents the number of successes out of

is the success probability for

The likelihood function for each of the observations is

denotes a conditional probability mass function. The binomial density is evaluated at the specified value of

. Then, a power prior is used to assign each observation in the combined data set a binomial or weighted binomial likelihood function depending whether the observation was from the current or pilot study, respectively.

Suppose the following power prior is placed on the success probability parameters, where

represent the historical successes and sample size, respectively, and

indicates a prior distribution. Suppose for this example that the discounting factor is set to

prior expresses your lack of knowledge about the success probability.

The following SAS statements use the likelihood and power prior distribution to fit the Bayesian binomial model with the historical data. The PROC MCMC statement invokes the procedure and specifies the input data set. The SEED= option specifies a seed for the random number generator, which guarantees the reproducibility of the random stream. The NMC= option specifies the number of posterior simulation iterations.

as a parameter in the model and assigns an initial value of 0.2 to it. The programming statements enclosed by the BEGINCNST and ENDCNST statements are executed once per procedure call and designate the discount factor for the power prior.

The PRIOR statement specifies a prior

as given in Equation 5 . The LLIKE= assignment statement assigns the log-likelihood function for

as given in Equation 3 ; the LOGPDF function calculates the logarithm of the binomial function. The IF/THEN statement uses the GROUP indicator variable to weight the binomial likelihood when the observation is from the pilot study.

The MODEL statement uses the GENERAL function, which indicates that you are using a SAS statement to construct a nonstandard density or distribution. The argument is an expression that takes the value of the logarithm function of the prior or likelihood distribution. In this case, the nonstandard density is the binomial or weighted binomial likelihood, and the argument is the logarithm of the density. 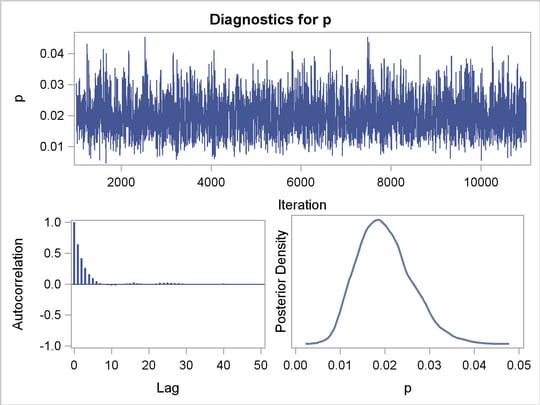 PROC MCMC produces formal diagnostic tests by default, but they are omitted here because informal checks on the chains, autocorrelation, and posterior density plots show desired stabilization and convergence.

Using the power prior, the posterior mean of the success probability is 2.00% with a 95% credible interval of

, providing evidence of a treatment effect.

Modeling the clinical trial data set in a Bayesian binomial model with a power prior is a good way to make use of the pilot study. It enables you to use a different class of informative priors and incorporates relevant historical data and information.