Researchers study the results of a taste test on three different brands of ice cream. They want to assess the testers’ preference of the three brands. The taste of each brand is rated on a five-point scale from very good to very bad. the five points correspond to response variables Y1 through Y5, where Y1 represents very good and Y5 represents very bad. Response variables contain the number of taste testers who rate each brand in each category. The very bad taste level (Y5) is used as the reference response level. Two dummy variables, BRAND1 and BRAND2, are created to indicate Brands 1 and 2, respectively. Brand 3 is set as the reference level in this example and is represented in the data set when both of the dummy variables equal zero.

Multinomial ordinal models occur frequently in applications such as food testing, survey response, or anywhere order matters in the categorical response. Categorical data with an ordinal response correspond to multinomial models based on cumulative response probabilities (. In this data set, the ordered response variable is the taste tester’s rating for a brand of ice cream.

, be from an multinomial ordinal model with mutually exclusive, discrete response levels and probability mass function

represents the number of people from

th brand in the

denote the number of testers who taste the

denote the probability that the response of brand

denote the corresponding cumulative probability that the response falls in the

th level or below, so

. The transformed cumulative probabilities are linear functions of the covariates written as

refers to the logit link function,

represents the effects for the covariates, and

represent the baseline value of the transformed cumulative probability for category

such that the constraint

and the group probabilities for the

th levels are as follows:

The likelihood function for the counts and corresponding covariates is

denotes a conditional probability density. The multinomial density is evaluated at the specified value of

and the corresponding probabilities

, which are defined in Equation 2 through 4.

There are six parameters in the likelihood: the intercepts

and the regression parameters

that correspond to the relative Brand 1 and 2 effects, respectively.

Suppose the following prior distributions are placed on the six parameters, where

indicates a conditional prior distribution:

The joint prior distribution of

is the product of Equation 6 through 9. The prior distributions in Equation 7 through 9 represent truncated normal distributions with mean 0, variance 100, and the designated lower bound. The lower bound ensures that the order restriction on

. The odds ratio is useful for interpreting how the taste preference for the different brands of ice cream cpmpares. For this example, Brand 3 is set as the reference level, which implies that

The PARMS statement puts all six parameters in a single block. The PRIOR statements specify priors for the parameters as given in Equations 6 through 10.

. The DO loop and coinciding GAMMA assignment statements calculate

as in Equation 1. The five ETA assignment statements calculate the individual probabilities that an observation falls into the

th response level as in Equation 2 to Equation 4.

The LLIKE statement uses the multivariate LOGMPDFMULTIM function to calculate the value of the log likelihood function as in Equation 5. The multinomial density is not listed in the section "Standard Distributions" in the PROC MCMC documentation, so you use the DGENERAL function in the MODEL statement. The letter "D" stands for discrete. The log likelihood is the input parameter because the DGENERAL function must be specified on the logarithm scale. Since the multivariate log likelihood function takes the dependent variable into account, you do not need to explicitly state the dependent variable in the MODEL statement.

Figure 1 displays diagnostic plots to assess whether the Markov chains have converged. 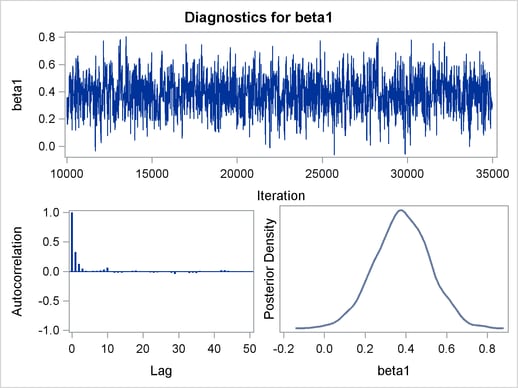 The trace plot in Figure 1 indicates that the chain appears to have reached a stationary distribution. It also has good mixing and is dense. The autocorrelation plot indicates low autocorrelation and efficient sampling. Finally, the kernel density plot shows the smooth, unimodal shape of posterior marginal distribution for

. The remaining diagnostic plots (not shown here) similarly indicate good convergence in the other parameters.


Figure 3 reports summary and interval statistics for the regression parameters and odds ratios. The odds ratios provide the relative difference in one brand with respect to another and indicate whether there is a significant brand effect. The odds ratio for Brand 1 and Brand 2 is the multiplicative change in the odds of a taste tester preferring Brand 1 compared to the odds of the tester preferring Brand 2. The estimated odds ratio (

) value is 2.8366 with a corresponding 95% equal-tail credible interval of