Health service researchers frequently study length of hospital stay (LOS) as a health outcome. Generally originating from heavily skewed distributions, LOS data can be difficult to model with a single parametric model. Mixture models can be quite effective in dealing with such data. This example illustrates how to perform a Bayesian analysis of an exponential mixture model for LOS data. The experimental MCMC procedure is used for this analysis.

The LOS data analyzed in this example originate from geriatric patients in a psychiatric hospital in North East London in 1991 and were studied by Harrison and Millard ( 1991 ) and McClean and Millard ( 1993 ) . Each observation represents the LOS in days for an admitted patient. 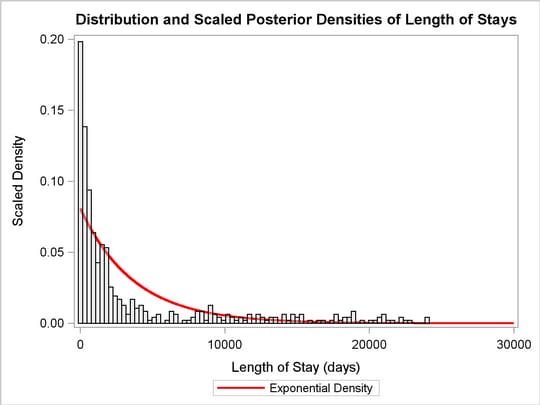 Mixture models can be expressed as a weighted average of

is the component probability density function, and

are the weights defined by the following constraints:

There are three parameters in the density:

, as the average LOS for the standard- and long-stay groups, respectively. In addition,

Suppose the following prior distributions are placed on the three parameters:

is the density function for the inverse-gamma distribution. Priors of this type are often called diffuse priors . The

prior expresses your lack of knowledge about the mixture proportion.

Label-switching is a common problem that arises in mixture models. It was described by as a result of the invariance of the mixture likelihood function under the relabeling of the mixture components. In an effort to remove label-switching, Harrison and Millard ( 1991 ) place an identifiability constraint that the average LOS of the standard-stay group is less than that of the long-stay group; that is,

The following SAS statements use the prior distributions to fit the Bayesian exponential mixture model. The PROC MCMC statement invokes the procedure and specifies the input data set. The NMC= option specifies the number of posterior simulation iterations. The THIN=5 option specifies that one of every five samples is kept. The PROPCOV=QUANEW option uses the estimated inverse Hessian matrix as the initial proposal covariance matrix.

The ODS OUTPUT statement creates an output data set post_summ used later for a graphical analysis of the fit in Figure 8 . The PARMS statement puts all three parameters

in a single block and assigns initial values to each of them. The PRIOR statements specify priors for all the parameters. Note that

can be specified with one PRIOR statement because they have the same prior distribution.

By turning ODS Graphics on, PROC MCMC produces graphs at the end of the procedure which enable you to visually examine the convergence of the chain. See Figure 3 . Inferences should not be made if the Markov chain has not converged. 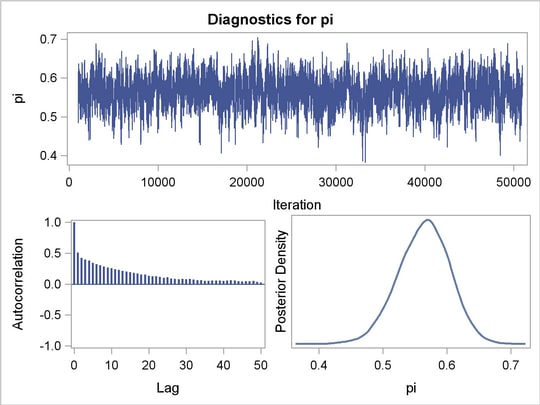 . The trace plots indicate that the chains appear to have reached stationary distributions. The chain also has good mixing and is dense.

The autocorrelation plots indicate low autocorrelation and efficient sampling. Finally, the kernel density plots show the smooth, unimodal shape of posterior marginal distributions for each parameter. If label-switching had occured, you would see jumps in the trace plots or multimodal density plots.

Figure 4 contains the "Parameters" table which lists the names of the parameters, the blocking information, the sampling method used, the starting values, and the prior distributions.

The "Tuning History" table, shown in Figure 5 , displays how the tuning stage progresses for the multivariate random walk Metropolis algorithm used by PROC MCMC to generate samples from the posterior distribution. An important aspect of the algorithm is the calibration of the proposal distribution. The tuning of the Markov chain is broken into a number of phases. In each phase, PROC MCMC generates trial samples and automatically modifies the proposal distribution as a result of the acceptance rate.

The "Burn-In History" and the "Sampling History" tables show the burn-in and main phase sampling, respectively.


Figure 6 displays summary and interval statistics for each posterior distribution.

Figure 7 reports a number of convergence diagnostics to assist in determining convergence. These are the Monte Carlo standard errors, the autocorrelations at selected lags, the Geweke diagnostics, and the effective sample sizes.


Figure 6 displays the marginal posterior summaries. The larger group of standard-stay patients has an average LOS of

for the standard-stay and long-stay group, respectively.

Figure 8 illustrates the scaled mixture of exponential density and the gain in model fit from the two-component exponential mixture model.

The single-component exponential model had an average LOS of 3712 days. The mean parameters found when fitting an exponential mixture model to the standard-stay group and the long-stay group are 619 and 7752 days, respectively. The mixture distribution fits the data better than the exponential distribution, especially at the low values of LOS. Additional components could be fit and evaluated in similar methods or with information criteria.