The objective of NHANES is to study the health and nutritional status of the US population. NHANES uses a multistage stratified area sample with typically two PSUs per stratum. Strata are created on the basis of geographic location, metropolitan statistical area (MSA), and other demographic information. MSAs or a group of counties are selected as PSUs from each stratum. Sampling weights are unequal because of different selection probabilities among different subgroups and for reasons such as nonresponse and undercoverage. For more information about NHANES, see http://www.cdc.gov/nchs/nhanes/about_nhanes.htm.

NHANES III data contain missing values in many items. Multiple imputation was used to impute some of the missing items. Five multiply imputed data sets are available for public use. Because FHDI is used in this example to impute the missing values, you need the observed data, the missing (or imputation) flag for every item, and only one imputed data set. The data sets Core and IMP1 have been downloaded from the Centers for Disease Control and Prevention’s website (https://www.cdc.gov/). The Core data set contains the demographic variables, full sample weights, replicate weights, and imputation flags. The replicate weights are created by using Fay’s BRR method, with a Fay coefficient of 0.3. The IMP1 data set contains the first version of the five multiply imputed data sets.

Before you apply the FHDI method to a data set, you should (1) incorporate auxiliary information in the imputation by creating imputation cells and (2) create bins for variables that have many levels.

Imputation cells divide the data into groups of similar units such that the recipient units have characteristics similar to those of the donor units in the same group. Characteristics of imputation cells might come from the same survey or from other sources, such as census data or previous surveys. The cell identification is known for every unit in the sample. For a helpful review, see Brick and Kalton (1996). For the purpose of this example, a cluster variable is created by using two demographic variables, HSAGEIR and HSHSIZER, and by using the FASTCLUS procedure in SAS/STAT. Both variables are available in the Core data set, and they do not contain missing values. These clusters are identified by the variable Cluster in the HealthMiss data set. Levels of the variables Cluster and Married are used to create imputation cells.

The following statements use the FHDI method to impute the missing values:

You request that all five variables be imputed jointly and that the imputed data be saved in the HealthFHDI data set.

The following PROC SURVEYMEANS statements estimate the mean diastolic blood pressure in the year 2000 population, and in the subpopulation of smokers and nonsmokers.

A box plot of the weighted distribution of diastolic blood pressure is displayed in Figure 6. The first box is for the overall population, and the other two boxes are for the two domains defined by smoking habits. 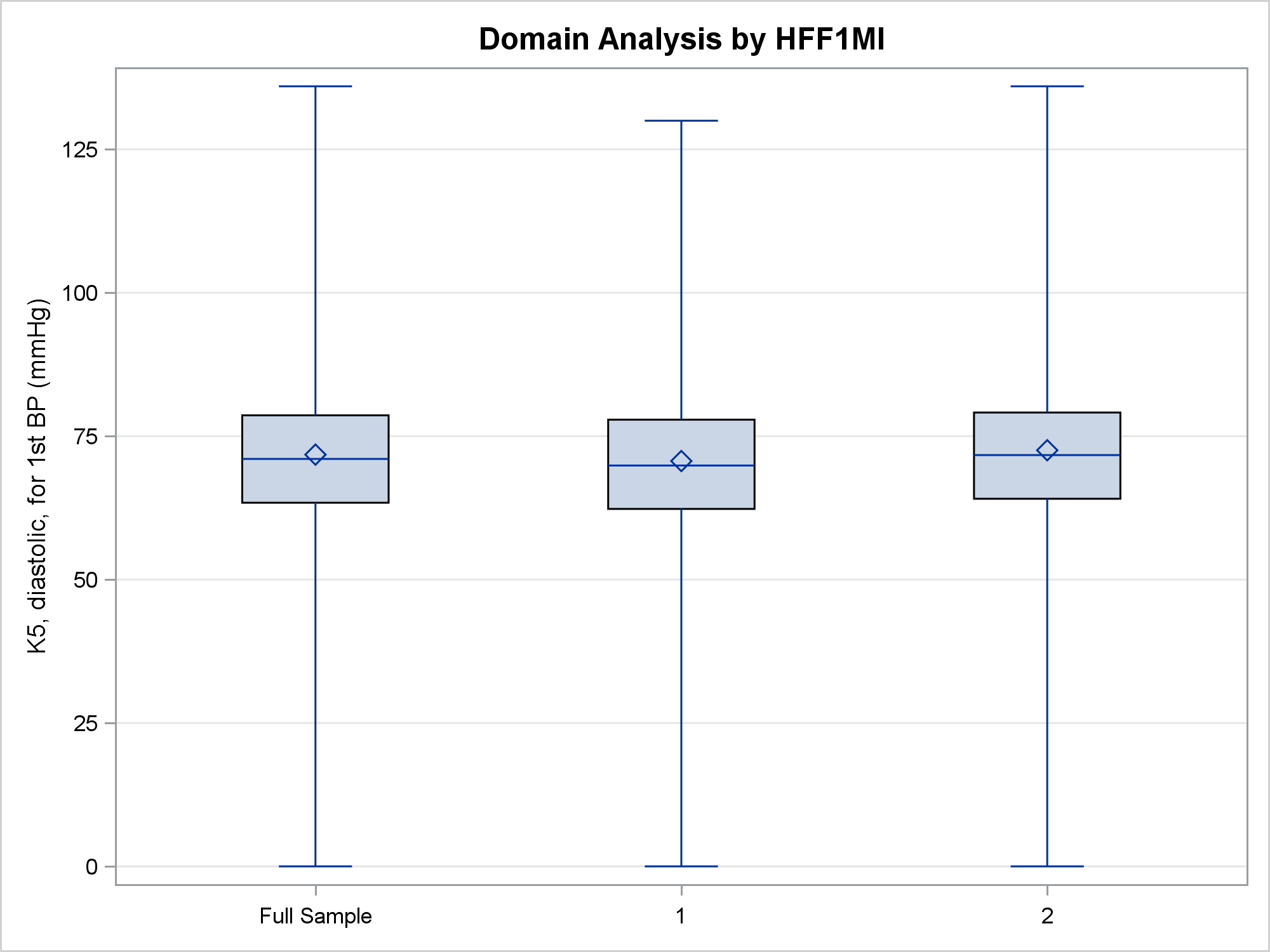 The following PROC SURVEYREG statements estimate the regression coefficients for regressing diastolic blood pressure on smoking status, gender, height, weight, and age. Imputation-adjusted weights and imputation-adjusted replicate weights are used for point estimation and variance estimation, respectively. The SOLUTION option in the MODEL statement displays the parameter estimates. Estimated values for the regression parameters along with their standard errors are shown in Figure 7. The OUT= option in the OUTPUT statement saves the residuals and the fitted values in the SAS data set Resid.

Estimated regression parameters and their standard errors are displayed in Figure 7. All covariates except height (BMPHTMI) have small standard errors compared to their estimated values. Thus, they are all important in describing the regression relationship in the NHANES III population between 17 and 60 years of age. The degrees of freedom for the t tests is 52, which is equal to the number of BRR replicates.


The following PROC SURVEYREG statements request a residual plot by using the residuals and fitted values from the Resid data set. Imputation-adjusted weights are displayed by using a heat map, as shown in Figure 8. The SHAPE=HEXAGONAL option requests hexagonal bins, and the NBINS=60 option specifies that 60 bins be used. For more information about how to create customized graphs by using ODS graphs, see Kuhfeld (2016). The weighted residual plot does not reveal any major violations from the model assumptions—namely, linearity and equal variance.

Because fractional imputation increases the number of observation rows, you must use imputation-adjusted weights in all analyses that involve fractionally imputed data sets. 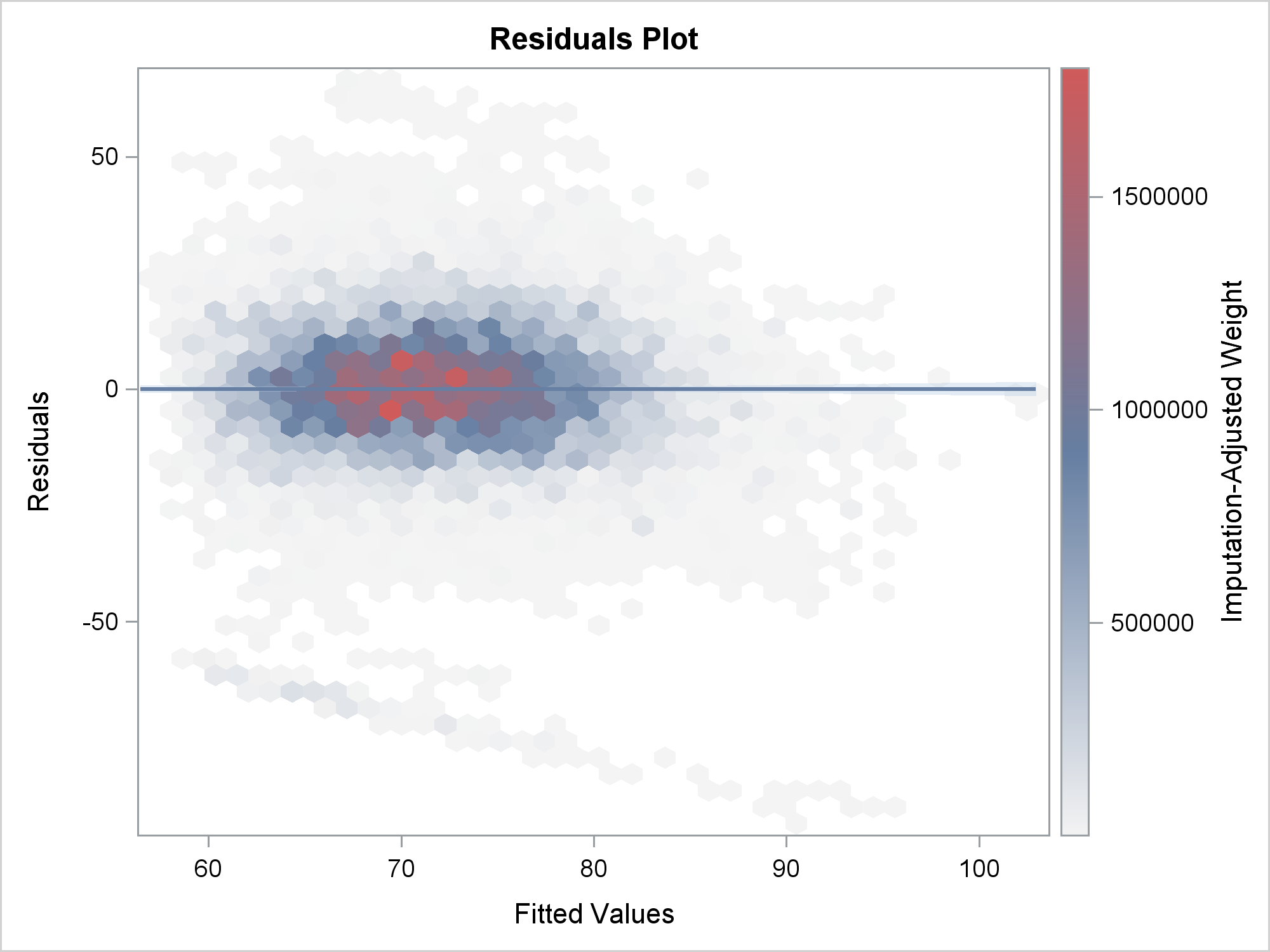