is defined as any solution,

, to the quantile regression minimization problem

where the loss function

Minimization of the loss function

is equivalent to the maximization of a likelihood function formed by combining independently distributed asymmetric Laplace densities (Yu and Moyeed, 2001).

The asymmetric Laplace distribution has the following probability density function (Yu and Zhang, 2005):

, the posterior distribution of

is the prior distribution of

is the likelihood function, written as

There is no standard conjugate prior distribution for the parameters of the pth regression quantile, but you can use Markov chain Monte Carlo (MCMC) methods to approximate the posterior distributions of the unknown parameters. Yu and Moyeed (2001) prove that if you choose the prior of

to be improper uniform, then the resulting joint posterior distribution is proper.

This example from Yu and Moyeed (2001) explores the distribution of the serum concentration (grams per liter) of immunoglobulin-G (IgG) conditional on age in a sample of 298 children. A detailed discussion of the data appears in Isaacs et al. (1983) and Royston and Altman (1994). The following DATA step reads the data and creates the data set Igg:

You can use the SGPLOT procedure as follows to generate a histogram of the response variable IgG for a visual inspection of its marginal distribution: 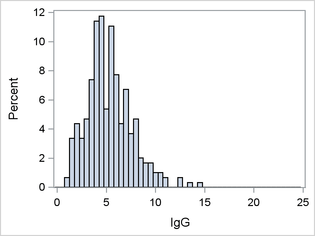 You can also use PROC SGPLOT as follows to generate a scatterplot of IgG by Age:

Figure 2 shows the relationship between IgG and Age. There is some evidence of an upward trend.

The following SAS statements demonstrate how to use the MCMC procedure to fit this quantile regression model for a single quantile. Because PROC MCMC does not recognize the asymmetric Laplace distribution, you must write out the log-likelihood function and use the GENERAL() function.

The PROPCOV option in the PROC MCMC statement specifies that the conjugate-gradient method be used in constructing the initial covariance matrix for the Metropolis-Hastings algorithm. The NTU= option requests 1,000 tuning iterations. Experience shows that increasing the number of tuning iterations often results in improved mixing of the Markov chains. The MINTUNE= option requests a minimum of 10 proposal tuning loops. Increasing the minimum number of proposal tuning loops above the default number of 2 is sometimes needed in order to achieve convergence of the Markov chain. The NMC= option requests 30,000 MCMC iterations, excluding the burn-in iterations.

, the quantile that is being fitted.

The PARMS statement lists the model parameters, b0, b1, and b2, and specifies that their initial values be 0.

The PRIOR statement specifies that the parameters b0, b1, and b2 have independent, improper uniform prior distributions.

and the random variable u.

The MODEL statement specifies that the response variable IgG have an asymmetric Laplace distribution, as defined by the log-likelihood function LL.

Output 1 shows that the Monte Carlo standard errors (MCSE) of each parameter are small relative to the posterior standard deviations (SD). A small MCSE/SD ratio indicates that the Markov chain has stabilized and the mean estimates do not vary much over time.

Output 2 shows the “Effective Sample Sizes” table. The autocorrelation times for the three parameters range from 16.59 to 23.08, and the efficiency rates are low. These results account for the relatively small effective sample sizes, given a nominal sample size of 30,000.

In many quantile regression problems, it is useful to examine the quantile process, or how the estimated regression parameter for each covariate changes as

varies over the interval

. This example, which is a variation on an example from Yu and Moyeed (2001), explores the stack loss data from Brownlee (1965). The data are from the operation of a plant where ammonia is oxidized to nitric acid; the oxidation is measured on 21 consecutive days. The response variable, StackLoss, is the percentage of ammonia lost (times 10), and there are three explanatory variables: AirFlow, which measures the air flow to the plant; WaterTemp, which measures the cooling water inlet temperature; and AcidConc, which measures the acid concentration. The following DATA step reads the data and creates a SAS data set:

Figure 4: Visual Inspection of the Data

Yu and Moyeed (2001) fit the following quantile regression model to these data:

for the quantile regression parameters. Suppose you span the range of

in increments of 0.05. That is, you want to estimate the

quantiles; there are 19 quantiles in all. First, you create a new data set that has 19 copies of your original data set. The new data set must be indexed and sorted by

. Second, you use the MCMC procedure’s BY-group processing capabilities to estimate the model parameters for each of the 19 quantiles. The ODS OUTPUT statement saves the “Posterior Summaries” and “Posterior Intervals” tables as SAS data sets. These data sets are used later to produce plots of the quantile processes for each parameter. The DATA= option of the PROC MCMC statement specifies the newly created input data set. The BEGINCNST and ENDCNST statement block, where you previously specified a single value for

The contents of the “Posterior Summaries” and “Posterior Intervals” tables for the whole quantile process are saved in the ODS OUTPUT data sets By_ps and By_pi, respectively. The following statements merge these two data sets, sort the merged data set, and then use the SGPLOT and PRINT procedures to produce quantile process plots and tables for each model parameter:

Figure 5 and Output 5 show that the sample means for the intercept, b0, are negative throughout the process. They are increasing up to the 0.15 quantile and are then relatively constant up to the 0.60 quantile. The means then begin a steady decline until the 0.85 quantile, where they begin increasing. The 95% HPD intervals are negative throughout most the process; the exception is the 0.95 quantile, whose 95% HPD interval contains 0.

Figure 5: Quantile Process Plot for b0

Output 5: Quantile Process Table for b0


Figure 6 and Output 6 show that the sample means for the parameter b1, the coefficient for AirFlow, are positive throughout the process. The means increase for most of the process, peak at the 0.65 quantile, decrease monotonically until the 0.90 quantile, and then increase slightly. The 95% HPD intervals are all strictly positive except for the 0.05 quantile’s interval, which contains 0.

Figure 6: Quantile Process Plot for b1 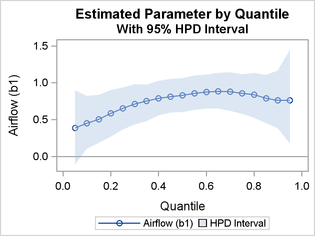 Output 6: Quantile Process Table for b1

Figure 7 and Output 7 show that the sample means for the parameter b2, the coefficient for WaterTemp, are positive throughout the process. The means decrease monotonically up to the 0.50 quantile and then increase monotonically, forming a quadratic shape. The 95% HPD intervals are all strictly positive.

Figure 7: Quantile Process Plot for b2

Output 7: Quantile Process Table for b2

Figure 8 and Output 8 show that the sample means for the parameter b3, the coefficient for AcidConc, are relatively constant and close to, but systematically below, 0. The 95% HPD intervals contain 0 throughout the process.

Figure 8: Quantile Process Plot for b3 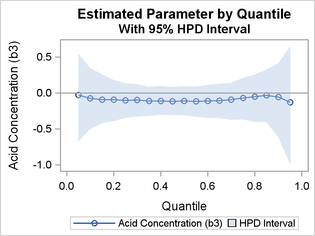 Output 8: Quantile Process Table for b3