This example uses the MCMC procedure to fit a Bayesian multiple linear regression (MLR) model by using a multivariate prior on the regression parameters. It demonstrates how to use existing SAS multivariate density functions for specifying prior distributions.

The following data set contains the average brain and body weights in grams and kilograms, respectively, the average gestational length in days, and the litter size for 95 different species as given in:

Figure 1 displays the distribution of each variable. The skewed distributions and the differing orders of magnitude for the minimum and maximum brain weight, body weight, and gestational length suggest the need for the log transformation. 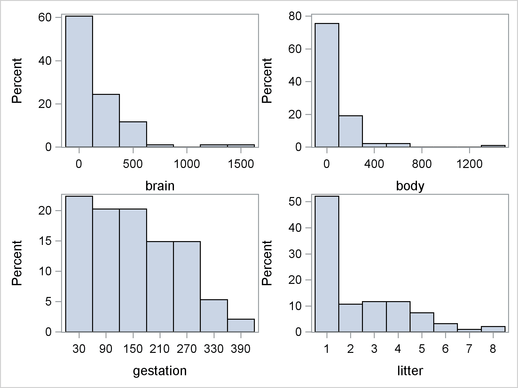 is the vector of covariates listed as

species. The African elephant has been omitted from this example because it is easily recognized as an extreme outlier even on the log scale.

denotes a conditional probability density. The normal density is evaluated at the specified value of

and the corresponding mean parameter

, which is defined in Equation 1. The four regression parameters in the likelihood are

Suppose you had expert or prior knowledge that some of the covariates were correlated. You might want to use a multivariate prior to incorporate your information. Using the multivariate normal prior, you enable covariates to be independent or correlated a priori. You can also specify the a priori correlation that you believe to be positive or negative. Suppose you thought, a priori, that body weight and gestational age were positively correlated and that body weight and litter size were negatively correlated. Calculate the prior covariance as the product of the prior correlation and standard deviations. More formally, the formula for calculating the covariance of the

is the prior correlation and

are the sample standard deviations of the

Suppose the prior correlation between the first and second covariate was

, and a priori you thought the standard deviations of the regression coefficients for log of body weight and gestational age were

, respectively. The prior covariance of the log of body weight and gestational age can be calculated as

. Similarly, suppose the prior correlation between the first and third covariate was

and a priori the standard deviation of the litter size was

. The prior covariance of the log of body weight and litter size can be calculated as

Suppose the following prior distributions are placed on the parameters:

indicates a prior distribution,

indicates a multivariate normal prior of dimension four with mean vector

, and igamma indicates the density function for the inverse-gamma distribution.

is a shorthand for all model parameters, in this case, beta0, beta1, beta2, beta3, sig2. The symbol ExpBeta2 and ExpBeta3 are defined in the program for

The BEGINCNST and ENDCNST statements are used in conjunction with the DATA step functions. Programming statements enclosed by the BEGINCNST and ENDCNST statements are executed once per procedure call. You use the LOGMPDFSET function within the statements to set up a symmetric positive definite matrix from its lower triangular elements listed in row-major format. The RC assignment statement is set to 0 when the numeric arguments describe a positive definite matrix; otherwise it is set to a nonzero value.

that you want to obtain posterior summary statistics and convergence diagnostics graphs.

The LMVN assignment statement uses the LOGMPDFNORMAL function to calculate the log density of the multivariate normal density given in Equation 3. Next, the PRIOR statement for the

as given in Equation 4.

. The MODEL statement specifies the likelihood function as given in Equation 2.

Figure 2 displays convergence diagnostic graphs to assess whether the Markov chain has converged. The trace plot indicates that the chain appears to have reached a stationary distribution. The chain also has good mixing and is dense. 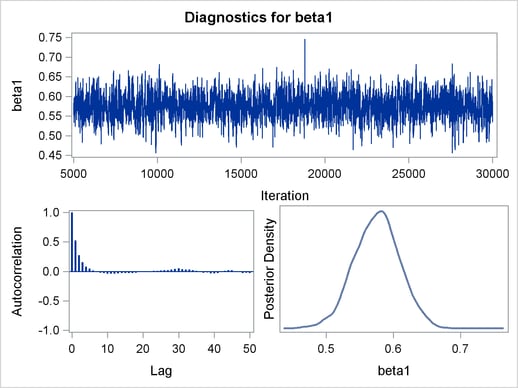 . In a similar fashion, the rest of the diagnostic plots should be examined to ensure convergence of all parameters.


Figure 3 reports summary and interval statistics for each regression parameter and the variance parameter. Note that for the slope coefficient 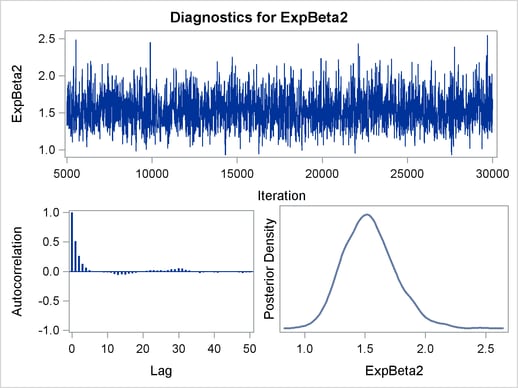 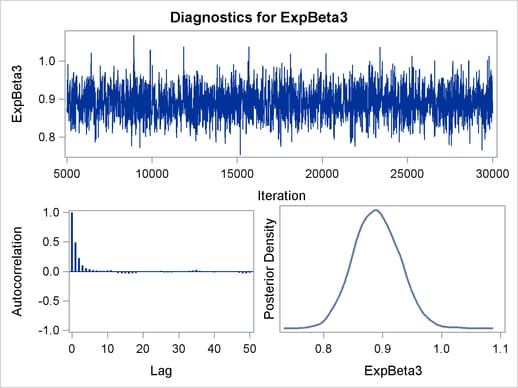 . The brain weight increases by a factor of

(approximately 54%) for each logarithmic change of one day of gestational age. Similarly, the brain weight decreases by